I've tried almost all of those recipes with varying success myself. And, believe me, I'm no top-chef. To quote a friend who is a professional: "Everybody who can read, can cook."

This is, too, to save the honour of the oh-so-bad English/British cooking. Among the many dumb prejudices the uninformed, prejudiced and plainly dumb are so proud of, this is one of the dumbest.

The photos are, apart from a very few, taken from cookbooks or the Internet. Amateur snapshots of food tend to be rather unappetizing.

The labels "German" respectively "English" refer to the language of the article, not to the recipe in question.

British-ness in a Nutshell

Trust the Brits to make a "cooking video" like this! I've GOT to share it. (Btw everybody who has watched ITV's "Jeeves and Wooster" knows this house intimately. MUCH better than the painfully corny "Downton Abbey".)

Mary Berry visits Highclere Castle, the real-life Downton Abbey, home to the eighth Earl and Countess of Carnarvon and renowned as the setting for some of the most lavish and influential weekend house parties in history. Mary discovers what it takes to keep a home like this going in today's world, meeting everyone from the family to the house staff and the estate's loyal posse of gamekeepers.

There are so many aspects to this. One is how the Carnavon family managed to keep the house through the times and even restore it to its old glory. Another one is how undemanding Royalty have become since Edwardian times (that's tongue-in cheek-ish), yet another one, how a woman in her eighties can look quite THAT stunning without appearing the slightest bit "Joan-Collins-ish". Her biography might shed a bit of light on the reason why - I, being an old reactonary, think. But there is much, much more.

I used to spend a lot of time in Ireland as a student and became, among other things, very fond of what they called "brown bread" in County Cork. It wasn't all that brown compared with our German dark breads, but with the standard packaged and sliced white bread it certainly was. I remember specifically excellent open sandwiches with butter and ham for tea.

Decades later I found the recipe and tried it. It's really very easy to make.

Why does it work so well?

Soda bread is a variety of quick bread in which sodium bicarbonate (otherwise known as "baking soda" or "bread soda") is used as a leavening agent instead of yeast.

The ingredients of traditional soda bread are flour, baking soda, salt, and buttermilk. The buttermilk in the dough contains lactic acid, which reacts with the baking soda to form tiny bubbles of carbon dioxide. An advantage of quick breads is their ability to be prepared quickly and reliably, without requiring the time-consuming skilled labor and temperature control needed for traditional yeast breads.

In Ireland, the flour is typically made from soft wheat, so soda bread is best made with a cake or pastry flour (made from soft wheat), which has lower levels of gluten than a bread flour. In some recipes, the buttermilk is replaced by live yoghurt or even stout. Because the leavening action starts immediately (compared to the time taken for yeast bread to rise), bakers recommend the minimum amount of mixing of the ingredients before baking; the dough should not be kneaded much.

Various forms of soda bread are popular throughout Ireland. Soda breads are made using wholemeal, white flour, or both. In Ulster, the wholemeal variety is usually known as wheaten bread and is normally sweetened, while the term "soda bread" is restricted to the white savoury form. In the southern provinces of Ireland, the wholemeal variety is usually known as "brown bread" (sic!) and is almost identical to the Ulster wheaten.

Method:
Preheat the oven to 400F/200C/Gas 6.
Tip the flours, salt and bicarbonate of soda into a large mixing bowl and stir.
Make a well in the centre and pour in the buttermilk, mixing quickly with a large fork to form a soft dough. (Depending upon the absorbency of the flour, you may need to add a little buttermilk if the dough seems too stiff but it should not be too wet or sticky.)
Turn onto a lightly floured surface and knead very briefly and gently.
Form into a round and flatten the dough slightly before placing on a lightly floured baking sheet.
Cut a cross on the top and bake for about 30 minutes or until the loaf sounds hollow when tapped. Cool on a wire rack.

Next time I do it, I'll try it with oatmeal. (Very easy to make, just crush rolled oats in a food processor.)

I promised to post the recipe for my my very special, heavenly potato salad (Kartoffelsalat) recipe  here already. So there you are:

Kartoffelsalat is popular all over Germany, but the recipes are many, various and different depending on region, there are cold and warm ones as well (the latter I dislike, but that's just me). Mine has no claim to any German regional roots, the more as I come from Westphalia, lived for 11 years in Bavaria and am living now for more 12 years in Saxony, so I've come to know and appreciate a lot of regional German cooking.

This simple recipe is based on 6 middle-sized waxy potatoes (and on trial and error). The  other quantities are more or less to taste.

Method
Boil the potatoes in the skin, peel and cut into slim, but not too slim slices.
Render small dices of  pork belly and fatback in the pan to the point where they are shrivelled to tiny crispy bits. I use about an eighth of the pork belly and fatback each pictured above. Add the crispy bits and the fat to the potatoes.
Add the mayonnaise. (I'm too stupid to make my own mayonnaise but there are excellent products from smaller regional food companies here in Saxony. I never use one of the big brands - disgusting.) The amount is up to taste, but use enough because the mayonnaise will otherwise "vanish" in the process of "permeation" (can't think of a better word).
Cut the Bockwurst into not too small dices and add. Same goes for the ham. (I prefer Bockwurst to ham, even though Kartoffelsalat is mainly eaten with Bockwurst.)
Cut the eggs in thick slices and add. They will lose shape anyway.
Cut the pickled gherkins into small dices and add.
Do the same with the onion.
Add salt, pepper and a little bit mustard to taste.
Mix well and let stand overnight covered in the fridge for "permeation".
Should the result be too solid, you can add a bit of cream instead of more mayonnaise.
Mix again well before serving.

Garnish with slices of boiled eggs and dainty sticks of pickled gherkins.

Kartoffelsalat mit Würstchen ("Wiener" or Bockwurst) is the, in some regions of Germany, traditional Christmas Eve dish. Read my article about an Anglo-German Christmas Eve.

My English friends often asked me how to make German Bratkartoffeln because they never seemed to get the hang of it. Well, here it goes:

This simple recipe is based on 6 middle-sized potatoes (and on trial and error). The  other quantities are more or less to taste.

Method
Boil the potatoes in the skin, peel and cut into not too slim slices. (I always cook them longer than necessary and squash them in the pan, because then they'll better absorb the fat, but that's a matter of taste. If you don't like it too greasy, don't.)
Use a non-non-stick frying pan.
Render small dices of  pork belly and fatback in the pan to the point where they are shrivelled to tiny crispy bits. Don't be too shy with the amount of pork belly and fatback, you'll need quite some fat. I use about a quarter of the pork belly and fatback each pictured below, but that's a lot.
Cut the onion(s) into chunky rings (or you may coarsely dice them should you prefer that), fry them in the fat. It's better to add them while pork belly and fatback aren't totally shrivelled, because the crispy bits might get scorched. Fry to a point where they are yet not dark brown, but that, again, is matter of taste. I prefer them just pale yellow).
Add the potatoes and fry them as brown as you like. Stir often.
Add salt and pepper to taste.

I like it with fried eggs. Pickled gherkins (I prefer those with a tad of sweet) and lettuce salad go well with it too. (Easy dressing for green lettuce salad: whipping cream, lemon juice, salt and pepper - all to taste. Finely chopped onions or chives can be added.)


Notabene: Serves not more than two as a main dish.

The Adventures of an Anglo-German Christmas Eve


Mid-December, I came across this video. (Hint for Anglophiles: the English Heritage videos are all worth watching!)

As one can't English get ginger wine in the shops here (which is more of a sort of liqueur) and there was'n enough time to get it via Amazon (and frankly, I was pre-Christmas broke), I got a decent white wine and soaked thin slices of fresh Ginger in it for a week in tightly closed glasses in the fridge. I was aware that this wouldn't be close to a substitute for genuine ginger wine, but it had to do.)

The ingredients were meant for a huge bowl, so I broke it down to a much smaller portion, suitable for two.

When it came to the spices I realized that buying them individually would be prohibitively expensive and got a mixture of German Lebkuchen spices instead which contains cinnamon, cloves and nutmeg and apart from that nothing which would do any harm to the brew, such as allspice, coriander, ginger, fennel, mace and caraway. 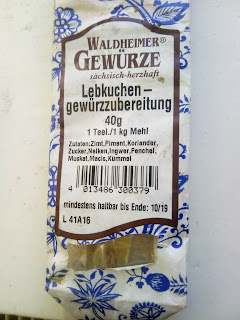 The first portion was too sweet, too watery, not hot and not quite spicy enough, so I reduced honey and sugar, put in more gin and spice, heated mixture and bowl gently first and used boiling instead of hot water.

It was a treat!

With it went the, in some regions of Germany, traditional Christmas Eve dish "Würstchen ("Bockwurst" or "Wiener") und Kartoffelsalat". I gave it a little bit more pizzazz by using Berner Würstchen (Bernese Sausages, i.e. "Wiener" wrapped in very thin slices of bacon) and maybe I'll post my very special, heavenly potato salad recipe later. (I did!)

All in all, it was a great success. 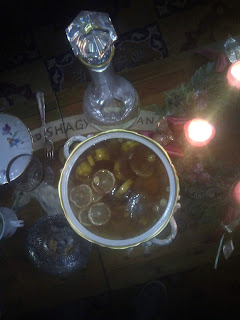 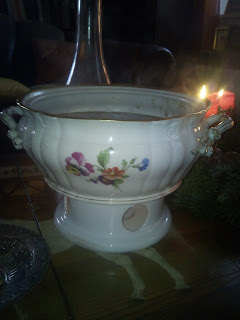 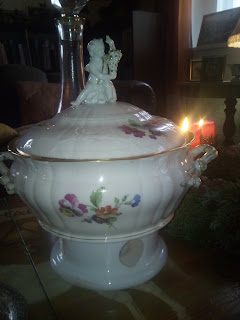 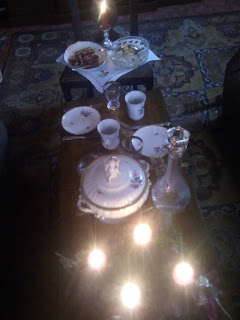 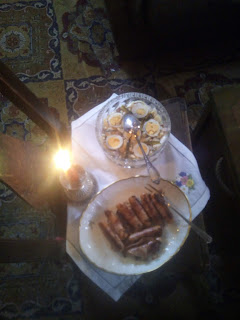 Btw, the bowl is the soup bowl from KPM Berlin, "Rocaille" with handpainted flowers, as is the rest of the dinnerware.